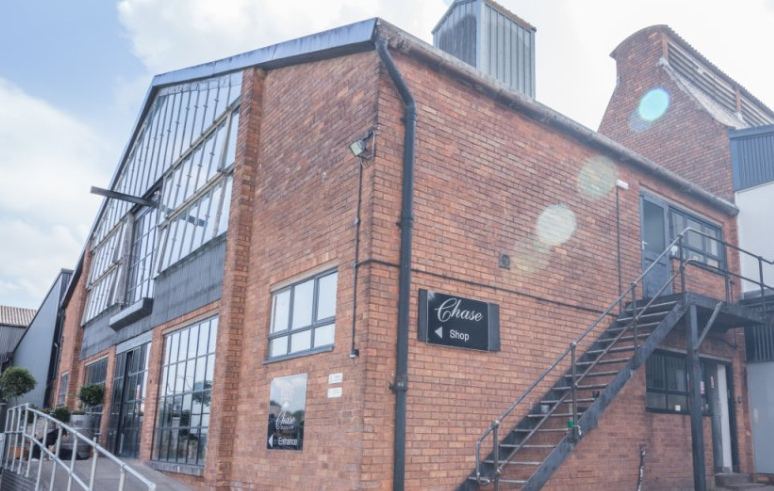 Last Friday I sprung a surprise on my boyfriend (who is also my Chief Transportation Officer – he’s building the van) and took him to Chase Distillery in Hereford, specifically in search of rhubarb vodka, but we found so much more.

Chase Distillery‘s home is a beautiful 400 acres farm situated just outside Hereford. William Chase, who started the distillery, lives a few miles away at another 500 acre farm. That’s a whole lot of farm land dedicated to the production of booze. Incidentally William Chase was also responsible for starting Tyrell’s crisps, which he has subsequently sold.

The tour began in the Chase Distillery shop, run by a charming and typical country lad called Guy. During the tour we learned a lot about the history and provenance of the Chase family of products. The ambition of Chase is to have end to end traceability of all the elements that go in to producing their beverages, and that even includes the water.

We were shown the process of creating vodka, gin and liqueurs as well as learning about some of the experimentation that went on to create the marmalade vodka. They basically chucked a load of vodka into their still and it burnt on to the inside, taking 3 days to clean, however, the experiment was deemed a success and they refined the process to make marmalade vodka today.

Finally we returned to the shop for tasting. Oh, the tasting. I’ll give you a quick run down of what we tried:

We also got 24 free pre-mixed marmalade mules and 2 sample of vodka.

Afterwards we nipped to Hereford for some food at Gilbies, which is a charming little Bistro with a huge fir tree outside it.

I now have the onerous task of creating cocktails for all my purchases. With quality spirits, I always try to ensure that other flavours don’t overpower them. So, let the cocktail experiments commence!